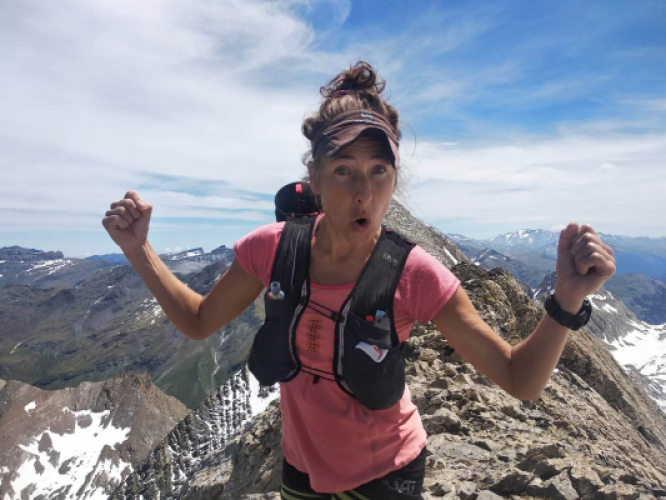 Tor de Geants, one of the five hardest runs in the world. How does it feel to be part of it?

„Journey to unknown dimensions.“ Lifefood's ambassador Harriet Kjaer shares her experience with you.

Tor de Geants - or “The Giants’ Peaks”, as the run is called in English, is held every year in September in the Italian Alps, in the valley of Aosta. The run is listed as one of the five hardest runs in the world. The Danish ultra-runner and Lifefood's ambassador Harriet Kjaer arrived as the first Danish woman, and together with 860 other runners, started what for some is a 338 km mountains run, but for others is a journey to unknown dimensions.

We know that only half of us will get to the goal, and as I stand on the starting line on Sunday morning in the mountain town of Courmayeur, at the foot of Mont Blanc, and I am about to run out of the town and up in the mountains; I cannot refrain myself from wondering… Will it be me? Will I be one of those who will come back here in Courmayeur, during the course of next weekend, and preferably in good conditions.

To be able to participate in Tor de Geants it is not enough to simply register. Even though the run doesn’t have any specific requirements for the runners besides from recommending them to be in good physical shape and being familiar with mountains, anyone can sign up. But out of 2200 registered, it is only 860 ‘lucky’ runners who, a few months later, get the pleasant news that they have been accepted and can now start their training. It is up to each participant to establish how much he or she will train for such a run.

What I wanted to say, however, is that if you train seriously you have more chances to get to the goal, to complete the run and to arrive in good conditions. 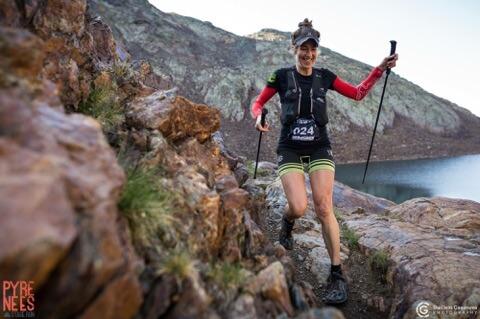 The goal line for me, is not the end of the run, but rather after a few days when I am back to my usual training route and I can feel that both my body and my motivation are in good shape. Training is only one of the many things that must be thoroughly prepared. Clothes, shoes and other material like backpacks, water containers, snow spikes for shoes, lamps, gloves, and hats are also important. Just like the training, it is wise to be prepared to stand in the cold or rain, with rain pants and muddy shoes; or have to change the batteries of your headlamp during the night, while darkness and loneliness slowly surround you...

Or perhaps vital, for when the temperature swings between +20 and -10 degrees, and you have to be fast and ready to take your clothes off and back on to avoid getting moist and wet when you come up to the heights in the chilling wind. 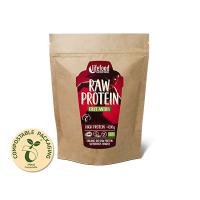 Sometimes it is already too late, and your body has “cooled down” so much that there is no other option than getting a helicopter ride to the nearest hospital, and get the treatment that is one of the reasons why most people have to leave their dream of completing the run behind - namely hypothermia, everything from light to extreme cooling.

In comparison with some of the other runs I have participated in, where I had to be self-sufficient during most of the route, Tor de Geants has the benefit of having mountain shelters and huts every 8-15 km approximately, with a well-indicated route.

That is usually when we know that there is not much left until a warm meal, a shelter from the cold wind and even the sun, which can be as big of a challenge for some. But maybe the most important of all is that in those bases we can found tents, mountain huts, bivouacs or greenhouse-like glasshouses that have been brought in specially by helicopter; you can expect to meet either a doctor by himself, sitting with his cup of tea, or a friendly group of mountain enthusiasts, frying sausages over a fire which they gladly share, while having a good time enjoying a beer, and waiting for the tired runners. 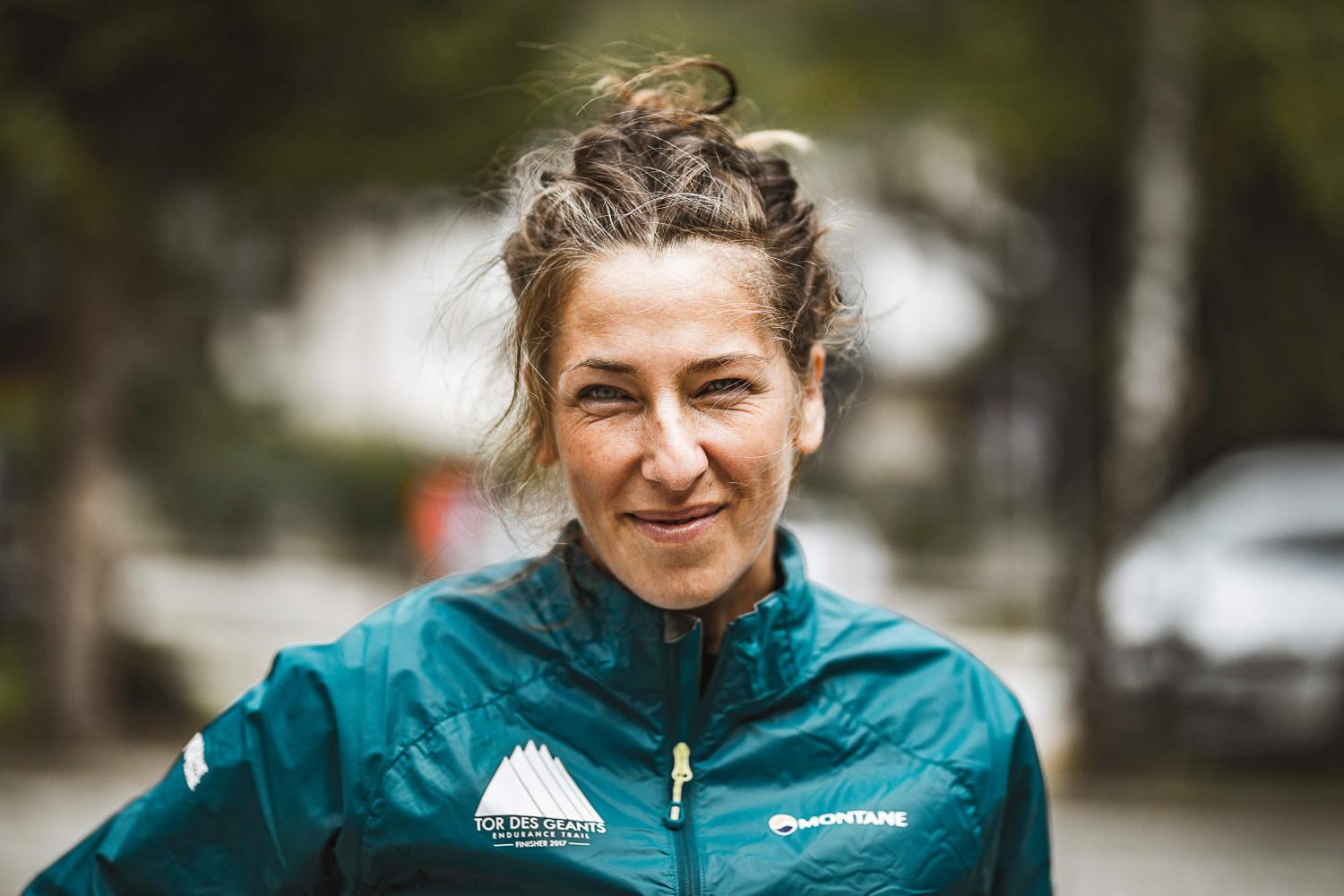 All those places where you can find exactly what you need, and what can get a quitting runner to keep on going, even though minutes ago they were determined to abandon the run. And as a result, keeps them going with a smile on their face.

TAKE YOUR STOMACH AND SHAKE IT FOR A HUNDRED HOURS, WHAT DO YOU THINK HAPPENS THEN?

And this is what Tor de Geants is about. We are there to experiment with the forces of nature, physical strength, endurance, lack of sleep, pain, blisters, coughs or digestive problems. But for most, the biggest challenge is the mental strength, which is affected by all the problems mentioned above, and which makes you become your own worst enemy.

The first night it was there ... The lack of mental strength - That doubt, hanging over you and screaming: “What is little me doing up here in the mountains, together with all men and women, seemingly big, fast, strong, and somewhat self-confident.”

Some runners enter the life base surrounded by a whole group of sponsors, assistants, friends, and family, always ready day and night, with full bottles of water, dry socks, massages and hugs. And then there is little me.

I am all alone, and on my way to a place, I have never been before, with more kilometers than I have ever done. On my way to unknown mountains.

And the doubt was my ”loyal” companion until kilometer 106, or the second out of 6 bases, where I could get my kitbag , filled with extra clothes, shoes, food and other necessities.

I met a lot of fantastic people during this run, which I sometimes followed for a few minutes, hours, or even days. But even if I was alone most of the time, I could still clearly feel the community around; we were together in this. Some of the elite runners completed the run in less than 70 hours, but for most of us normal amateurs, it is not necessarily beneficial to burn all the energy at the beginning.and those that do, will quickly be overtaken by walkers with sausages in their bags .

Everyone has to learn how to handle their own run, and I think for many, it is better to take it slow and easy at the beginning. And it is up to each runner to decide how long the beginning should be -or whether it should be until the finish line.

For most, completing the race is already a victory, so they only need to figure out how slowly they can allow themselves to go and still get to the goal line within the 150 hour limit.. Some run faster, but eat slower; others eat faster, but sleep longer, etc; which means that a couple of times a day you suddenly meet a runner you have seen a day ago and exchanged a few words with, like “Are you OK?”; or just “OK OK OK OK” if they are Japanese.

I started slower than what I had been training for, because I know from experience that when I come to just over half of a run, almost no matter how far it is, I can start relaxing and running a little faster. I know my body and mental capacity and I know when it is enough to complete the run. If I prepare myself to run for 1 hour, then I will aim for 1 hour. If I prepare myself to maybe running for 150 hours, then I will aim for 150 hours.

Every participant has his own TOR, his own journey, and mine started taking shape at km 225 when I knew that -except if I had an accident, I could complete it.

I could feel that even if I had only slept approximately 30 minutes per night, I still had the energy, the right spirit, and the willingness to accomplish it. I started increasing my speed and thus finding a rhythm that could certainly lead me to the finish line while feeling that special energy we, mountain runners, often feel when everything is going as it should and makes us feel like when we were children, running and playing in the woods. Because this is about having fun, even if it is hard. I know that positive thinking can move mountains... Or at least move me over the mountains. And this made me smile and gave me renewed energy during the last night when we were on our way to the highest peak, and those who were in the shelters warned us to put spikes on our shoes and, put on all the clothes we had in our backpack because it was about to get cold.

After having spent many hours on snowy slopes surrounded by a biting cold wind, and suddenly witnessing the sun shedding its first rays on the Mont Blanc that had been hiding its snowy peaks in the darkness of the night, I could not hold back my tears of gratitude.

The gift I received from the mountains that morning, with Mont Blanc dressed in pink tones glowing in the morning sun, warming up my body and my mind; that was enough for me. Getting to the goal line, in which position, and the number of hours; that was only a mere detail. 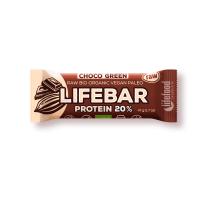 I had won my TOR, I had won the ‘giants' peaks. A hot bath, a meal, and a good bed were waiting, and that thought made me complete the last 20 km faster than I would have ever run a training, and hit the finish line after “only” 120 hours and 29 minutes, as the 110th finisher, and 11th woman .

The giants are the mountains Mont Cervino, Mont Rosa, Gran Paradiso and Mont Blanc. Or are they? As the race progressed, it seemed to me that it might in fact be us... The giants.

This was also confirmed on the Friday noon, when I arrived at the goal line to the audience's cheers and the speakers voice in the microphone, saying that here comes another giant... UNO ALTRO GIGANTE.